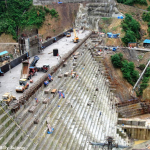 Villagers affected by the Bengoh dam who had initially agreed to be resettled with the condition that they were given houses, land, and basic infrastructure, are having second thoughts. In addition to being kept in the dark about the resettlement schedule, a logging company has moved onto the land the government put aside for the villagers. Read more here about the Bengoh Resettlement Scheme (BRS) and the effects of the Bengoh dam.

For information on dams in Borneo, please visit: https://borneoproject.org/our-work/ongoing-campaigns/stop-the-dams.

KUCHING: Bengoh Resettlement Scheme (BRS) liaison committee claimed villagers affected by the Bengoh dam are somewhat disillusioned by the government and a growing number of them have started having second thoughts about resettling.

BRS liaison committee chairman Itodio Peu Rayu claimed that besides being kept in the dark about the resettlement schedule, the villagers now faced another problem – a logging company had encroached into the land the government had alienated for the villagers.

Peu cautioned that the villagers should not be blamed if they eventually changed their mind and decide not to be resettled.

Residents of the four affected villages – Kampung Taba Sait, Pain Bojong, Semban and Rejoi in upper Penrissen – had initially agreed to be resettled at a site near Kampung Semadang with condition they be given houses, land and basic infrastructure at the resettlement area.

Speaking to The Borneo Post yesterday, Peu said the evacuation process had been long overdue and until today there was no sign that they could move down to the new site.

“It is such a long wait. We have been kept in a dilemma ever since the construction of the dam started in 2007.

“Since then we had faced all kinds of uncertainties, so much so that we were unable to carry out our usual activities.

“Although almost 100 per cent of the people here are farmers we simply cannot plant new crops because we don’t know when exactly we will have to vacate our land. This is the biggest problem that we have and it had affected our livelihood.

“Unfortunately, until today, the government never even bothered to compensate us for the hardship we have faced as a result of the dam development.”

He said now that a new problem had cropped up many of the residents were starting to have second thoughts about resettling.

“Last Wednesday we sent a memorandum to Kuching Resident Abdul Rahman Sebli Senusi, as chairman for Bengoh Dam Project Resettlement and Culture sub-committee, seeking his assistance to put a stop to encroachment by a logging company into the land alienated to us by the government.

“We gave the authorities 48 hours from the day of the memorandum to take action, but the latest information I received from the ground was that the logging company was still there. Now we will see what will happen in the next few days. If nothing is done then don’t blame the villagers if they change
their mind and refuse to move out.”

Peu said all this while the affected villagers had been considerate but some quarters apparently considered them as “naïve” and had taken advantage of them.

“We have been too considerate, so much so that in the end many people tried to take advantage of us, but not this time. You go and clear the land the government had already reserved for us and we will stay put in our own land.”

He added that all the villagers were against deforestation of the land allocated to them as they believed cleared land would no longer be fertile for farming.

Attempts to reach Abdul Rahman for comments on the latest development yesterday were unsuccessful.