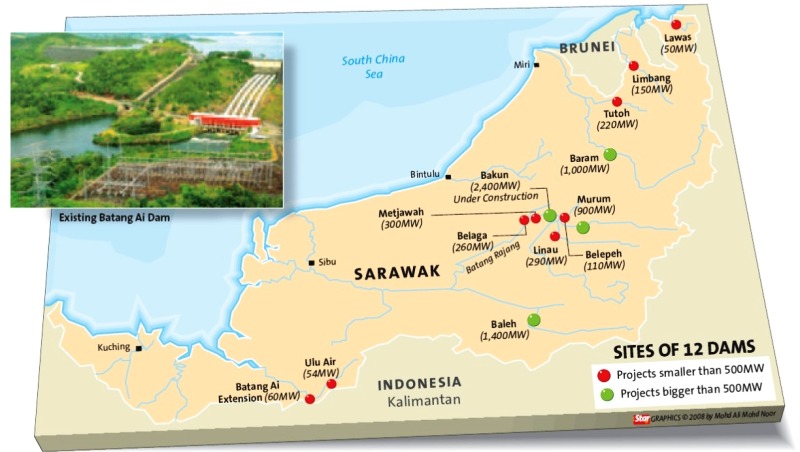 Massive hydroelectric dams in Sarawak are destroying the remaining forests of the region while violating the rights of the indigenous people who have called that land home for generations. And it gets worse… the Malaysian government is planning on building 12 additional dams.

The people of Sarawak know what happens when dams are built in remote areas of the province. The government may promise that people will be relocated to prime locations and will be given new homes and good schools, yet the reality never lives up to the promises. According to International Rivers, the Bakun dam, which was finished in 2010, put 700 square kilometers of virgin rainforest and prime farmland under water. An estimated 9,000 native residents, mainly from the Kayan/Kenyah indigenous group, were relocated and were forced to pay close to US$15,000 for homes, despite being subsistence farmers with no previous participation in the Sarawakian economy. Read more about the Bakun Dam.

Indigenous leaders in affected areas — especially on the Baram River– have stood up against dam expansion. As they state: “Flood from the dam and the infrastructure associated with the construction will definitely bring irreparable damage to the whole environment. It will destroy a heritage for which all Malaysian or human race should respect and harness.” Read more from the President of the Orang Ulu Association in Miri. Recently, it was announced that the Baram Dam would be put on hold, and that the Baleh Dam would go ahead first (read more).

Now is the time to take action against dam expansion. The Borneo Project’s allies and partners — particularly SAVE Rivers, the Borneo Resources Institute (BRIMAS), the Alliance of Indigenous Peoples, and Communities’ Information and Communication Center (CICOM) — are leading the charge against dam expansion. The Borneo Project is supporting their work through helping  with funding for educational projects, bringing international awareness to the issue, campaigning against those are pushing these dams through, and releasing a series of short films that exposes the realities behind the dams.

For the latest information on the fight against dam expansion in Malaysia, be sure to follow our website, www.borneoproject.org.

For an overview of the situation, watch Damming Our Future (10 min), the first film in our documentary series about the dams. You can find all of the films in the series here.