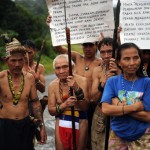 Fifteen years after the indigenous people of Bakun were forced to leave their land to make way for a controversial hydropower dam project, the state government issued a notice to declare these lands the Bakun Islands National Park. Read more below to find out why many people still remain on this land and why these residents were never aware of this notice.

Read more about Hydrodams in Malaysia then join the discussion on Facebook. 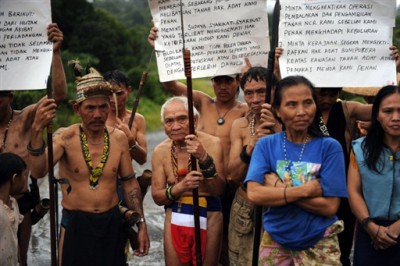 In a picture taken on August 20, 2009, Penan tribespeople man a blockade with banners and spears to challenge vehicles of timber and plantation companies in Long Nen in Malaysia’s Sarawak State. PHOTO/Saeed KHAN

The indigenous people from Bakun, Sarawak, may face yet another blow after they were forced to leave their homeland some 15 years ago to  make way for a controversial hydropower dam project. A notice has been issued by the state government in an attempt to gazette their  homelands as the “Bakun Islands National Park”.

In the notice, which was published in the local newspaper Borneo Post last Tuesday, Sarawak Chief Minister Abdul Taib Mahmud has listed 18 islands within the Bakun dam area to be gazetted as the national park.

Citing Section 10(1) of the state National Parks and Nature Reserves Ordinance 1998, Taib, who is also the state Resource Planning and Environment Minister, said any objection could only be made in a period of 60 days from the date of publication of the notice.

Failing which, “no claim to any rights or privileges in or over the area intended to be constituted a national park shall be entertained and such  rights or privileges, if any, shall be deemed to have been abandoned or the exercise thereof has been waived, by any person entitled thereto,”   reads the notice.

According to native customary rights (NCR) lawyer Abun Sui Anyit, the purported “islands” were actually the highlands before the dam project impounded the water and flooded the native homelands. Speaking to Malaysiakini, he said although the majority of the Bakun natives were  forced to leave to go to the Sungai Asap Resettlement Scheme, some people had been adamant to stay at Bakun until now.

He added that some people who had moved to Sungai Asap also returned to their homelands due to the bad living conditions at the resettlement  area. “While some other people moved to upstream areas, others built the ‘floating houses’ near their flooded old homes, and some of them built new houses on the islands,” he said.

In 2012, a research team of Swiss-based NGO Bruno Manser Fund had penetrated into the sealed-off Bakun Dam zone, revealing a shocking fact that hundreds of displaced people were living in floating houses on the Bakun impoundment. Abun Sui could not estimate how many people will  be affected by the latest development as he has not locate where the 18 islands are. However, following the state government listing out the GPS  coordinates of the islands, the NCR lawyer will be sending a team to visit there. Abun Sui was the PKR candidate for the Hulu Rajang  parliamentary seat in the recently-concluded general election, and lost to the BN candidate by a majority of 5,834 votes. Bakun is located in the  Hulu Rajang parliamentary constituency. 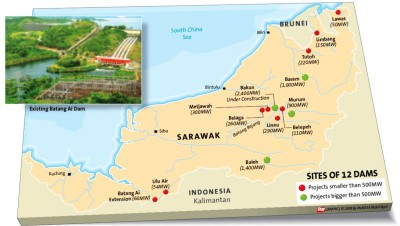 “None of us aware of the notice”

According to Wing Miku, who originates from Bakun, there were about 500 people still living in the dam zone. He said he has checked with his  father, who was currently living at Sungai Asap, who confirmed that none of the people there knew about the state government notice.

“The people in Sungai Asap always thought that even though they had made way for the dam project, they still owned the lands in Bakun. But  now, the state government wants to gazette their lands as a national park,” he said.

Expressing his worries, he said the state government should have informed the natives about the latest development instead of only publishing the notice in a newspaper. “How many people in Bakun and Sg Asap can see the notice in a newspaper?” he asked, adding that he and fellow residents would seek the opinions of NGOs and lawyers to decide their next action. Abun Sui said he would help to collect the objections from the natives and submit them to the state ministry.

“We also suggest that the government should make sure that the affected people know about this notice before they gazette it,” he said.

“The lands still belong to the natives”

Abun Sui stressed that the natives still have the land rights despite having moved out from Bakun. “We are of the opinion that all the lands in the dam area are NCR land. And according to case law, these should belong to the natives.” He said if the government refuses to recognise the natives’ land rights, they would bring the matter to court.

The RM7.3 billion Bakun dam project is located on the Balui River, a tributary of the Rajang River and some 60km west of Belaga. It is the second tallest concrete-faced rockfill dam in the world. There were about 10,000 Orang Ulu living at Bakun before they were resettled by the government to Sungai Asap in stages from 1998. However, some of them still nostalgic about their old life in the upstream areas of Sungai Balui and are adamantat continuing to  stay there.

Malaysiakini has sent an SMS to local BN state assemblyperson Liwan Lagang for comment, but no response has been received as yet. Liwan is also the Sarawak Assistant Minister of Culture and Heritage.
Updates:
7.11.13: Activists Raise Alarm Over Park That Will Dispossess Borneo Tribe Of Land
Tweet
Categories: Updates