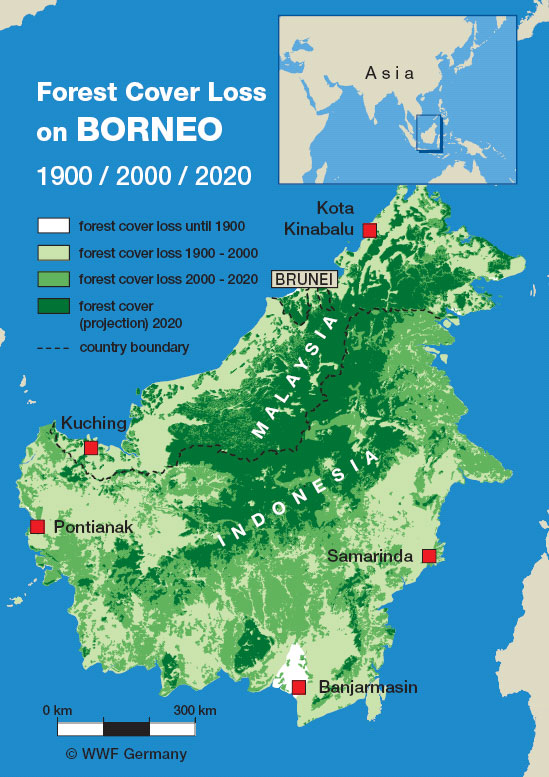 Thirty years ago, the introduction of commercial logging spurred encroachment onto the lands of Borneo’s indigenous peoples. The majority of all forests of Bornean Malaysia and Indonesia have been licensed to logging and plantation concessions, and most of these overlap with ancestral indigenous land claims. In violation of international and national law, logging and oil palm companies are clearing and burning vast tracts of ancient forest on a scale often exceeding deforestation rates in the Amazon.

Industrial logging and plantation development in Borneo’s forests have polluted rivers, degraded fragile forest ecosystems and made it difficult for communities to find the forest products they need to survive. Forest destruction has led to a decline in the bird, fish and mammal populations dependent on trees for seeds and fruit, as well as to a loss of medicinal plant, rattan, and palm species. The incursion of roads has enabled poachers to access formerly remote areas, and hillside erosion has led to extreme siltation of watersheds and coral reefs, which are affecting regional and global climate patterns.

Forest destruction has threatened traditional systems of land management and inflicted poverty, pollution, and social disintegration on once thriving communities. Efforts to protect remaining land through blockades, demonstrations, and court cases have been met with repression and brutality on the part of government agencies and corporations. As forest resources have become depleted, economic pressures have driven young villagers to leave their communities in search of employment. Industrial appropriation of indigenous land has compelled traditionally nomadic tribes to settle and become agriculturist, as their basic needs can no longer be fulfilled by forest resources. Recently settled nomads (Penan in Sarawak, Punan in East Kalimantan) are increasingly reliant on a cash economy for food, medicine, and other necessities. Tribes in transition to a settled lifestyle have little access to education and health facilities and lack basic survival knowledge, such as food crop cultivation and construction of permanent living structures.

The Malaysian and Indonesian governments have done little to mitigate the impacts of forest destruction, and government conservation efforts have largely failed due to high demand for illegal timber by export mills. In protected areas, bribes offered to government officials enable logging companies to easily carry out illegal operations. National and international laws that defend indigenous land rights are rarely enforced and frequently broken. Lands without written documentation of ownership are considered available for exploitation, and while Malaysian law recognizes native customary rights to lands occupied and cultivated by indigenous peoples, there is no official procedure to document such claims. Government requirements for written documentation of land ownership leave the burden of proof on communities who have had little or no access to titles or maps for these purposes. Land tenure conflict is high across Borneo, and remains a crisis issue for forest communities.