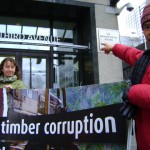 It turns out that US government has long-known how corrupt Taib is, and still allows the FBI to support him through renting Taib-owned offices in Seattle. Check out the press release from our friends at the Bruno Manser Fund below, and sign out petition here: https://borneoproject.org/updates/take-action-now-tell-the-fbi-to-stop-supporting-taib.

Wikileaks: US government well-informed on Taib corruption, abuse of power

(Kuala Lumpur / Washington D.C. / Basel) Only days after Western NGOs launched a campaign to pressure the US government’s Federal Bureau of Investigation (FBI) to cut ties with the Malaysian Taib family, whistleblower website Wikileaks confirms the US government has been aware of Taib corruption for years.

In a confidential cable to the State Department Washington dated 13 October 2006, the US embassy in Malaysia noted that „Taib and his relatives are widely thought to extract a percentage from most major commercial contracts – including those for logging – awarded in the state (Sarawak).“ (…) „Embassy sources outside the government uniformly characterize him (Taib) as highly corrupt.“ A source had told the US embassy that Taib appointed “compliant local leaders” from various tribes into “financially rewarding” government positions as a means to stifle potential opposition.

The US embassy’s Political Section Chief, Mark D.Clark, concluded after a visit to Sarawak’s state capital, Kuching that „the Sarawak state government remains highly corrupt and firmly in the hands of its chief minister. The $82 million state assembly building now under construction serves as perhaps the most obvious and extreme example of the self-enrichment of the state’s chief minister and other senior government officials.“

The US embassy also informed itself on the plight of Sarawak’s indigenous people. It was told by commissioners of Malaysia’s government-funded national human rights commission, SUHAKAM, that „the government largely ignores SUHAKAM’s recommendations“ to safeguard the rights of the state’s most vulnerable citizens.

Dr. Mohammad Herman Titom Abdullah, Suhakam Commissioner for Sarawak, had told US officials „that approximately 15,000 Penan tribe members (…) lack electricity, water treatment and schools.“ According to Wikileaks, the SUHAKAM commissioner „criticized the federal and state governments for not fulfilling their promises to provide access to primary education for all citizens. For many Penan children, Abdullah said the nearest school is more than two hours away by foot or boat.“

Taib patrols the state with 14 helicopters

In November 2009, the US embassy reported to Washington that Sarawak seemed to remain secure as the „safe deposit“ of Barisan Nasional (BN), the country’s ruling coalition: „Chief Minister Taib Mahmud remains unchallenged after 27 years in office, his government doles out timber-cutting permits while patrolling the under-developed state using 14 helicopters, and his family’s companies control much of the economy.“

US embassy officials were received by then Deputy Chief Minister George Chan „at his newly built mansion next to Kuching’s most exclusive golf course“. Chan told them that the Federal Government had been „pouring millions of ringgit“ for development into Sarawak. „He described the allocation as a form of ‚gratitude’ to the Sarawak state government for “delivering the seats to secure the BN’s majority at the Federal level.”

Sarawak opposition politicians Baru Bian and Baharuddin Moksin, however, explained the US embassy that the people were „fed up“ with Taib’s administration, „seen as only enriching his family and a small coterie of cronies.“

“Baharuddin explained that in Sarawak only three companies, Cahaya Mata Sarawak (which locals jokingly claim stands for “Chief Minister,s Sons”), Naim Cendera Holdings and Titanium Management Berhad, all associated with the Chief Minister’s family, are the only “big players in the state.” All major contracts and a significant portion of land to be converted to palm oil plantations (…) are given to these three companies.“

Embassy cables put the FBI in an uncomfortable position

The US embassy cables are showing clearly that the US government has for years been well and accurately informed on the Taib family’s corruption and abuse of power. The latest Wikileaks exposures are thus putting the American federal police, the FBI, in an uncomfortable position. The FBI, which is supposed to „combat public corruption at all levels“, is renting its Seattle Division office from Wallysons Inc., a property company owned by the Malaysian Taib family.

In a letter to FBI director Robert Mueller, the Swiss Bruno Manser Fund and San-Francisco-based Borneo Project had last week asked the FBI to cut ties with the Taibs, to investigate the Taibs’ US corporations for money-laundering and to freeze all Taib assets in the United States. Similar demands have been made by a number of NGOs to the governments of Switzerland, Germany and Canada.