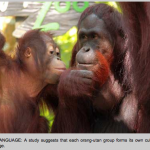 An exciting study on how orangutans communicate was recently published on May 7 by a team led by Dr. Serge Wich of the University of Zurich. Their work suggests that the way humans learn a language is possibly inherited from our ape ancestors. This study also suggests for the first time that each group of orangutans forms its own culture with its own language, implying that groups cannot communicate with each other even though they same the same forage boundaries. Read more about the implications this has on how we learn to speak as well as the impacts of orangutan rehabilitation.

For information on biodiversity in Borneo, please visit: http://borneoproject.org/borneo/biodiversity-conservation

ONE of the most exciting pieces of research on orang-utans and how they talk to each other was published on May 7 by a team of researchers led by Dr Serge Wich of the University of Zurich. Star-studded scholars from Indonesia, the United States, Netherlands and United Kingdom all came together for this study, which could revolutionize ideas on how learning a language in humans may have been inherited from our ape ancestors.

Researchers studied four calls common to orang-utans from two groups in Sumatra and three in Borneo. Two of the calls were used when nest-building and two others were mother “come hither” vocalisations to children ages two years and above. They recorded the calls while tracking orang-utans over a two-year period.

The results were startling and totally unexpected. Each group produced calls that were very different from the other groups. The Sumatran groups, where their genes were related, produced vocalisations very different from each other. The same was true for the three Bornean groups.

This study suggests for the first time that each group forms its own culture with its own language. Observations have also noted that orang-utans will invent their own calls which are learned by other members and then dropped when the call is no longer needed. Both of these skills were previously thought to be only in the human realm.

For example, the Malay word ‘apa’ is pronounced ‘apo’ in Minangkabau a clear illustration of an accent. To lay down in Bahasa Malaysia is ‘baring’, but in Bahasa Sarawak the word is ‘gurin’.

If language was inherited instead of learned, then the call of the orang-utans everywhere should be the same but with minor variations or accents. However, if language was learned or invented within groups, then they become dialects and languages.

However, the huge surprise was that the apes developed their own language to be used exclusively within their group. In other words, they formed dialects instead of accents. This means one group cannot communicate with the other even though they may share the same forage boundaries.

In human evolution, the ability to speak and speech acquisition was thought to involve only humans, a characteristic that some felt separated us from the apes. Now, however, we know that orang-utans they have the same ability. Therefore, was this ability then rolled into the genes that we inherited from the apes? How does this reflect in human linguistic groupings where people separated by only a slight geographic boundary evolve totally different dialects?

This research may also have applications in the rehabilitation sector. For example, what additional factors should be taken into consideration when moving an orang-utan from Semenggoh to Matang now that we know the apes from different groups cannot communicate with each other?

“Your question about reintroducing orangutans is a very interesting one,” replied Dr Wich in an email.

“We do not yet know the answer to your question, but one can imagine that if orang-utans from different populations (even though being the same subspecies) are reintroduced together they might not understand the meaning of all the calls the other individuals make.

“This is a real interesting consequence of the ‘call culture’ work and more work is needed to study how orang-utans acquire new calls. I plan to work more on this in managed settings with several of the co-authors on the paper.”