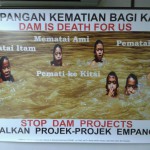 A statement was released today by the people who will be affected by the Murum Dam — one of 12 new mega dams planned for Sarawak. Communities are not being given the legal rights to their land, even as the government threatens to displace over a thousand people from the land they have used for generations. Check out their statement below.

Halt all survey works until clear and proper information given

The Pelieran Murum Penan Action Committee (PEMUPA ) together with 1,500 residents from seven (7) Penan villages located at the Murum Hydro Electric Dam Project (HEP) are strongly demanding that the current native customary land surveying works being carried out by the Land and Survey Department be halted until clear and proper information are made available to them.

They are making this demand because the information given to them by the Land and Survey Department is not clear and confusing to the Penans.

In early August this year, a group of surveyors and officers from the Land and Survey Department started to survey and demarcate the land in the Murum HEP area. The survey works were done arbitrarily without the participation of the local residents.

The survey works became an issue to Penans when there is little or no information being given to the Penans regarding the said works.

The Land and Survey Department told us that not all of our lands will be surveyed even though it will be inundated by the waters of the dam later.

We would like to state here that the areas which are affected and will be inundated by the Murum HEP are the native customary lands of the Penans. We have occupied and lived in the Murum, Peleiran and Danum since time immemorial. During all this time, our ancestors were living a nomadic life. Because of our nomadic lifestyles we have a lot of old camp sites (la’ lamin), historical sites, grave sites (tanem), sacred sites, etc all over the Murum HEP area. We have occupied this area before the arrival of the Brookes and continued to occupy this area up to the present government.

The Murum HEP will inundate 24,500 hectares of the Penan’s customary land.

If the government uses the 1958 cutoff point as an indicator of native customary rights claims for our temuda and fruit gardens, then this is not fair for us. We cannot accept this cutoff point as it is not logical for us to lead a sedentary lifestyle before 1958 as we were still nomadic during that time.

As long as our community is not given a clear and proper information and our views and concerns are not taken into account, then the survey works for each Penan village will be facing more problems and the issue will not be solved.

We want to make it clear here that we want all our lands to be surveyed. It is important that our gardens, fruit orchards, temuda, pulau galau, communal forest, grave sites etc be included in the survey. We also want our tana pengurip (ancestral domain) for each Penan village which are going to be inundated by water to be surveyed.