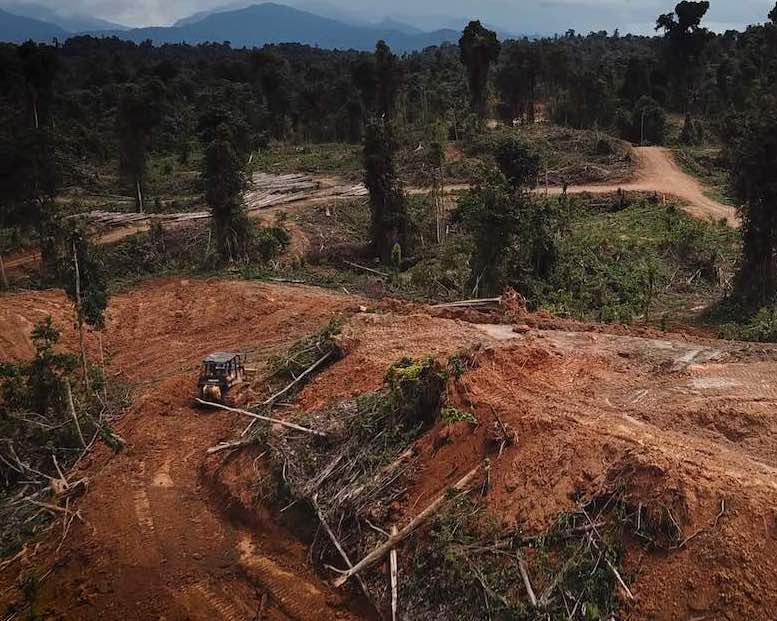 Tropical rainforests in the immediate vicinity of the Mulu National Park, the only UNESCO World Heritage Site of the Malaysian state of Sarawak, are threatened by a major oil palm plantation. Malaysian company Radiant Lagoon Sdn Bhd is currently logging the area against the will of nearby indigenous communities.

(Bateu Bungan, Sarawak/Malaysia): Sarawak’s most prominent tourist attraction, the UNESCO-protected Mulu National Park, is threatened by a major oil palm development in its immediate vicinity. The Malaysian company Radiant Lagoon Sdn Bhd has already started deforestation work for a 4400 hectare oil palm plantation in the Mulu forests which will adversely affect wildlife corridor between the Mulu National Park and the primary forests of Brunei.

The Bruno Manser Fund calls on the Malaysian government and the Sarawak state government to immediately halt the logging activities for the planned plantation. “Malaysia has promised the international community that it will stop deforestation for new oil palm plantations” said Lukas Straumann, the executive director of the Bruno Manser Fonds. “This is a clear case of an environmental disaster. The credibility of the Malaysian authorities and the country’s palm oil industry are at stake.”

Last month, indigenous peoples of three affected Berawan and Penan communities protested against the planned plantation in a letter to Sarawak Chief Minister Abang Johari. The letter was signed by 268 villagers of Bateu Bungan, Long Terawan and Kampgun Melinau who have not been consulted on the plantations. The letter has not been answered by the authorities.

This press release is published via the Swiss-based Bruno Manser Fund. BMF is committed to protecting the threatened tropical rainforests and the rights of the indigenous peoples, especially in Sarawak, Malaysia.