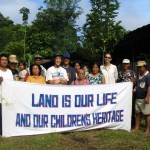 The indigenous people of Sarawak have won more native customary rights (NCR) land cases! We are also thrilled to tell you that the Borneo Project’s Legal Aid Fund helped support some of these cases. Read more below to find out the details of the cases and how they may convince the government of Sarawak to change for the better.

Read more about NCR land cases, then join the discussion on Facebook.

The state government of Sarawak suffered another embarrassing defeat in a native customary right (NCR) land case, the 10th before the Court of Appeal, and this victory for the natives has prompted NCR lawyer Baru Bian to ask newly-appointed Chief Minister Adenan Satem to relook at the state’s policy by recognising ‘pemakai menua’ (territorial domain) and ‘pulau galau’ (communal forest reserves) as native customary rights (NCR) land. There are more than 300 NCR land cases pending hearing in the High Court.

The state government under former chief minister Abdul Taib Mahmud had refused to recognize the court decisions and insisted that NCR land only confine to ‘temuda’ (farmed land) and that other lands are state land. Adenan succeeded Taib as chief minister effective Feb 28, 2014.

Baru, who is the state PKR chief and Ba’Kelalan assemblyperson, said that more and more NCR land claims are now affirmed by the Court of Appeal.nt’s appeal against the High Court decision which declared that  278 Iban families in Ulu Sebangan and Sebuyau in Simunjan district had native customary rights over 3,305 hectares of forest.

“For us lawyers dealing with NCR land claims, it is very meaningful and it is also very much welcome by the natives of Sarawak.

“With all these victories, we hope the new Chief Minister (Adenan Satem) will relook at the state policy of recognising ‘pemakai menua’ (territorial domain) and ‘pulau galau’ (communal forest reserve),” said Baru in Kuching yesterday when commenting on the natives’ victory before the Court of Appeal.

The suit was filed by Numpang Anak Suntai and 14 others who represented 278 Iban families in areas in Sebangan and Sebuyau of Simunjan district. They had sued the government and Quality Concrete Sdn Bhd and Royal Billion Sdn Bhd which had been given a licence to extract timber from 3,305 hectares of forest, which the Ibans claimed to be their native customary rights (NCR) land.

Firm owned by a sister to ex-CM

Quality Concrete Sdn Bhd is owned by Rasiah Mahmud, the sister of former chief minister Abdul Taib. The High Court had in May 2012 declared that the Iban families had native customary rights over the said forest.

He said that the NCR landowners had suffered losses in terms of income and damages due to the pollution of Sungai Selabu, Sungai Ijuk and Sungai Sebangan which had affected their lives. The water reservoir and piped water which feed the populace at Sebangan bazaar is also polluted and murky.

Farmed areas and padi fields or temuda within Sungai Selabu had also been affected by such pollution or destruction, while their hunting grounds and fishing grounds were destroyed and disrupted. He said fruit trees, crops, rubber, engkabang, pepper, durians, langsat, rambutan, temedak, Mawang, cocoa planted by the natives and their forefathers were destroyed and felled by the two timber companies.

The Sungai Sebangan cases were among those that The Borneo Project’s Legal Aid Fund helped support.  We also assisted activists arrested in 2010, including SADIA head Nicholas Mujah, in conjunction with demonstrations against unjust accusations of vandalism. Thank you so much to everyone who has generously donated to help this cause.