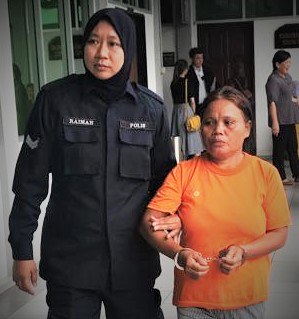 Miri – All the 11 villagers from Ulu Kelawit-Tatau under police remand were released after five days in the lockup. Although freed from incarceration, they are complaining about the manner and reason for being arrested.

The ten men and one woman were released by the High Court in Sibu under court bail of RM500 (Five Hundred Malaysian Ringgit) with two sureties for each of the eleven.

Before their release, they were being charged on the 30th of October by the magistrate court in Mukah, under section 341 of the Malaysian Penal Code for Wrongful Restraining a person. However, they refuted the basis of their charge. They claimed thatthey never “restrained” anyone but merely upholding their rights to protect their own property which was being invaded.

Relating her experience of being arrested, Lulong Anak Bujah, the only woman in the group claimed that she recognised the police officer who was putting the handcuff on her. Lulong continued, “We did not resist nor were we abusive when being arrested. While I was being handcuffed, I asked the police officers why we were arrested as we did not commit any crime but merely safeguarding our properties from intruders; that was when he hit the back of my head and pushed my head down.”

The raid was carried out on the 25th October while most of the blockaders were away in Mukah waiting for the release of their fellow protestor, Nasar Anak Nawing who was arrested at the blockade a day earlier. Those villagers manning the blockade site on that day were the ones who were arrested and their tents including their properties burnt by the police.

The lawyer for the villagers, Mr. Simon Sia, who was with them at the release, said that the case is scheduled for hearing in Mukah on the 6th of November 2018.

SAVE Rivers is a Civil Society Organisation which advocates for and empowers rural communities to protect and restore lands, rivers and watersheds through research, training and capacity building.