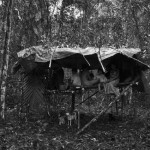 A group of indigenous Penan has resumed protest against the construction of the Murum hydroelectric dam, claiming that the government has not met demands for fair compensation. Acceptable reparation would include enough land to be self-sufficient through farming, a share of the dam’s profits, and full redress for land lost, the group says.

KUCHING, Sarawak, Malaysia, September 19, 2013 (ENS) – The Penan indigenous people affected by the Murum dam in the Malaysian state of Sarawak on the island of Borneo have renewed their blockade of the dam site.

They say are protesting because the state government has failed to fulfill their demands for fair compensation, enough land for farming and a share in the profits flowing from the dam. The Sarawak government’s US$1.3 billion Murum dam will impound the Murum River in the uppermost part of the Rajang River basin, 200 kilometers (124 miles) from the nearest city, Bintulu.

It is part of the Sarawak Corridor of Renewable Energy, SCORE, a new development corridor established by the state government in central Sarawak. Under this project, the Murum dam will be the first of up to 12 large dams that the government plans to build on indigenous lands.

The Penan first blocked the construction at the Murum dam in September and October 2012 for several weeks when they heard about the conditions of their resettlement.

After failed negotiations with the government, they renewed the blockade in late August of this year.

The blockade was suspended on September 4, when the government and dam developer Sarawak Energy invited them for negotiations.

The Long Wat village is the first to face the water of the rising Murum reservoir.

Under pressure, the Penan group from Long Wat decided to accept an additional MYR10,000 (US$3,177) per family and moved to their new resettlement at Tegulang.

There, the formerly self-sufficient nomadic Penan will live in small apartments and farm the land they are given in compensation for their move. But Sjotveit attempted to portray the Penan as dependent, saying, “Sarawak Energy accepts that we have a special obligation to the communities affected by our projects and we are determined to be a good neighbor for the long term. Together with the state government, we are committed to support the Murum communities in their transition to sustainable economy and self-sufficiency.”

Other affected communities renewed the blockade three days ago because their leaders were not invited to the negotiations.

Eyewitnesses report that the police escorted workers to the dam site and tried to intimidate the protesting Penan.

The blockaders say they are not willing to accept the MYR10,000 per family. They want the government to meet their demands before they will move to their resettlement site at Metalon.

They insist that each family should receive not 14 but 25 hectares of land, a 10 percent share in the profits from the Murum Dam and full compensation for their lost land, among other things.

Sarawak Energy claims that the Penan were prompted to blockade the dam site by nongovernmental organizations, but the Penan on the blockade say it was their own idea. Sanang Kallang, a villager from Long Nuar, told a video crew from Peoples Documentary, “Nobody gave us advice to do so, we Penans are the ones who initiated the blockades.”

“Initially when they wanted to build the dam, they said it was for the Penans and for progress. And the government’s slogan was: Peoples first,” said Kallang.

“But now the people are abandoned and all our requests are not met by the authorities,” he said. “Their promises were not written in black and white. That’s why we the Penans initiated this blockade, it’s totally our own initiative.”

The blockaders say they are letting the timber trucks pass, they are not hurting anyone, nor are they collecting any money from anyone, but they never said they agreed to have the dam in their territory.

Kallang says the land they are being offered is stony and swampy and not suitable for them.

“What we want,” said Kallang, “is Stop the Murum Dam!”

For a detailed history of the Penans’ struggles with dam builders, click here to see an account by the U.S.-based nongovernmental organization International Rivers.