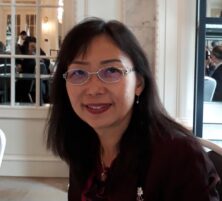 Teresa Kok, Malaysia’s Minister of Primary Industries, is “very concerned“ about the current expansion of oil palm plantations on indigenous lands near the UNESCO-protected Mulu National Park. Ms. Kok stated on Tuesday that she had already contacted the Deputy Chief Minister of Sarawak “on the Mulu natives issue“ and promised that she would follow up on the matter.

“My ministry will be presenting a paper on stopping the oil palm plantation expansion in the coming chief ministers meeting“, she wrote in an e-mail to the Bruno Manser Fonds.

This is the first time the DAP-affiliated Minister has acknowledged ongoing deforestation problems in the Malaysian palm oil sector.

Since taking office last July, Ms Kok put herself at the helm of an aggressive international lobby effort by the Malaysian palm oil industry that denied the industry’s role in deforestation and claimed the sector was fully committed to sustainability.

Ms. Kok’s lobbying efforts culminated in October 2018 when she accused the European Union of impeding Malaysia from achieving the UN’s sustainable development goals.

“We welcome the Minister’s promise to hold the Sarawak government accountable over the destruction of the unique Mulu forest for more oil palms“, said Lukas Straumann of the Bruno Manser Fonds. “The Malaysian palm oil sector cannot claim to be sustainable while rainforests are being cleared for new plantations.“

The Bruno Manser Fonds calls for an immediate halt to logging in the Mulu forest and a moratorium on the development of new oil palm plantations.

A petition to the Malaysian Prime Minister and the Sarawak Chief Minister to save the Mulu rainforest has been launched on Monday.