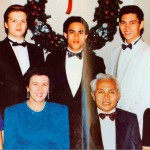 It’s time that Taib is held responsible for the way that he has stolen from the people of Sarawak in order to line his pockets, and the pockets of his immediate family. Check out this sign-on letter from the Bruno Manser Fund in Switzerland, signed by a huge coalition of activists and NGOs from Malaysia and around the world. While the Borneo Project is not listed here, we have become a signatory and our name will be included in future publications of the letter.

For more information on the Chief Minister in Borneo, please visit: https://borneoproject.org/our-work/ongoing-campaigns/stop-timber-corruption-in-sarawak.

According to the NGOs’ letter to Malaysia’s top prosecutors, Taib and “thirteen of his family members as co-conspirators” are accused of “the illegal appropriation of public funds, the abuse of public office, the illegal appropriation of state land, fraud, larceny, corruption, systematic exploitation of conflicts of interest, suspected money-laundering, and conspiracy to form a criminal organization.”

The letter is signed by thirteen NGOs from Malaysia, Australia, Germany, Japan, Switzerland and the United Kingdom as well as a number of individual signatories from Malaysia. Greenpeace, FERN and the Swiss Bruno Manser Fund are among its most prominent international signatories. Three NGOS from Sarawak – Borneo Resources Institute Sarawak (BRIMAS), The Network for Native Land Rights (TAHABAS) and the Sibu-based Institute for Development of Alternative Living (IDEAL) – have also endorsed the letter.

Copies of the letter have been sent to all major foreign embassies in Malaysia, heads of government, cabinet ministers and prosecutors in seven countries, the top executives of ten multinational corporations who conduct business in or with Sarawak and the editors of leading media around the globe. The letter is accompanied by sixteen exhibits that document the accusations against the Taib family and can be downloaded online at www.stop-timber-corruption.org/resources.

“We allege that only the systematic breach of the law and the use of illegal methods has enabled Mr. Taib and his family members to acquire such massive corporate assets”, the NGO letter states. “Mr. Taib has been a state-paid public servant and government minister ever since 1963 and did not possess any significant independent assets prior to taking up office.”

“Pernicious and detrimental” capital flight should be heavily punished

In addition, the NGOs point to the Taib family’s transfer of illicit assets worth “hundreds of millions, if not billions, of US dollars” out of Malaysia to countries such as Canada, the United Kingdom, the United States, Australia and Hong Kong. “This is particularly pernicious and detrimental for the economy of Sarawak and Malaysia as a whole and should thus be heavily punished.”

The Taib family has been identified as being behind property companies in Canada (Sakto Corporation, City Gate International Corporation and others), in the UK (Ridgeford Properties Ltd.), in the US (Wallysons Inc, Sakti International Corporation and others) and as being closely linked to at least 22 companies in Australia. Some of these companies have, according to the NGOs’ letter, been given to the Taibs free of charge by the son of Yaw Teck Seng, the founder and majority shareholder of Samling, one of Malaysia’s biggest logging conglomerates. Other Taib companies, such as Regent Star and Richfold Investments in Hong Kong, have been found to be linked to a multi-million-dollar kickback scheme uncovered by Japanese tax investigators.

Malaysia’s international credibility is at stake

The NGOs come to the conclusion that “the criminal nature of Mr. Taib and his family members’ ‘private’ businesses can no longer be denied by anyone who is intellectually honest, desirous of seeing the truth and interested in the good of the Malaysian people and, in particular, the people of Sarawak”.

Malaysia’s top prosecutors are finally asked to fulfil their duty and take immediate police action against Abdul Taib Mahmud and his 13 co-conspiring family members: “Malaysia’s international credibility is at stake over the Taib case.”