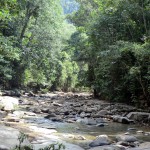 After out cry from indigenous groups and ally NGOs, the Baram dam has been up on hold! This is thrilling information for many of our allies in the Baram region. Now, however, the Baleh Dam, which is near the Murum and (infamous) Bakun dam, will now go ahead first.

While this is exciting news, infrastructure for the Baram Dam, including bridges and roads, is still being built. It’s time to up the pressure against the Baram Dam and stop it once and for all! Check out this article from www.freemalaysiatoday.com.

For more information on mega-dams in Borneo, please visit: https://borneoproject.org/our-work/ongoing-campaigns/stop-the-dams

The dam will be built at a later date after problems with the Orang Ulu natives are sorted out.

KUCHING: The proposed Baram Dam is to be placed on hold following strong opposition from the Orang Ulu natives of Kayan, Kenyah and Penan communities – about 20,000 of whom face displacement as a result of the project.

Instead the proposed Baleh Dam, in the neighborhood of Murum and Bakun dams in the Kapit division is to be built first.

Construction of the Baleh Dam will start after the completion of the Murum Dam by the end of 2013, said Awang Tengah Ali Hassan, Second Minister of Planning and Resource Management.

He said that the government decision to build the Baleh HEP dam first instead of the Baram Hydro Electricity Power (HEP) dam was because the Baleh dam project would affect a limited number of people upstream of the dam.

Moreover, both social and environmental assessment (SEIA) and technical reports on the proposed project have been completed.

“It will not affect the livelihood of many people, making it easier to implement as very little resettlement will be involved,” he said.

The cost of the project will be finalised after the completion of all the studies, he said.

Of all the proposed dams, the Baram is the most controversial as it affects the lives of the Kayans, Kenyahs and Penans whose longhouses, their lands, their history and cultural heritage will be submerged in a lake of 389 sq km (38,900 hectares).

About 90% of the land submerged is native customary rights land.

Located between the inflows of Sungai Patah and Sungai Kahah from the left and Sungai Hit from the right, the dam will be 162m high above foundation level and its structure across the Baram River will have a crest length of 685m.

It will be constructed and designed as a roller-compacted concrete (RCC) gravity dam in order to produce 300MW of electricity.

Due to the topographical conditions in the project area, a 70m high saddle dam will be constructed approximately five km south-west of the project site.

In a recent statement, the Kenyah Association in Miri called on the government to abandon the dam project as it is a ‘senseless’ exploitation of the Baram resources driven by greed and immorality.

“It is at the expense of the native communities,” said Peter Kallang, chairman of the association.

He said: “No one can blame us in thinking that the construction of the dam is a calculated, intentional and purposeful manoeuver to wipe out our races.

“It will not only cause the colossal environmental devastation and severe consequences on the ecosystem, but it will also cause a permanent degeneration of the ethnic identity and heritage of the natives who live in the region,” he added.

The state government and the Sarawak Electricity Board (SEB) have recently stated that they will fully comply with international standards when implementing the 12 proposed new dam projects in Sarawak including this controversial Baram Dam.