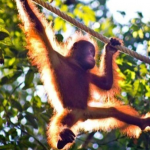 Borneo is home to more than 90% of the world’s orangutan population. Other than the Indonesian island of Sumatra, Borneo is the only habitat where these ginger apes live in the wild. Poaching and loss of habitat are the main reasons the population of these endangered animals is declining. Scroll down to view breathtaking photos of this amazing ape.

Among The Orangutans Of Malaysian Borneo (PHOTOS) 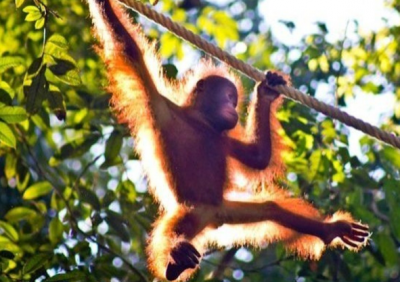 If you’ve ever wanted to see an Orangutan in the jungle, Borneo is the place for you.

Home to more than 90 percent of the world’s orangutan population, Borneo is the only location, other than the Indonesian island of Sumatra, where the ginger apes live in the wild. With poaching and habitat loss, the population of these endangered animals isn’t getting any larger. In addition, the number of orangutans in captivity took a significant hit last month with the passing of Duchess, the oldest Bornean orangutan in North America, who died of cancer in the Phoenix Zoo at the age of 52.

In hopes of catching a glimpse of these shy, often territorial creatures, my wife and I traveled an hour south of Kuching, Borneo’s largest city, to the Semenggoh Wildlife Center. Since 1975, the Center has taken in orangutans and other animals that have either been orphaned, found injured in the forest, or were previously kept as illegal pets. It’s now one of the best places on the planet to get up close and personal with wild orangutans.

There are no cages or fences, so wildlife sightings aren’t guaranteed. However, regular feeding times provide fairly predictable wildlife viewing opportunities while ensuring the orangutans have the food they need until they’re able to fend for themselves in the Semenggoh Nature Reserve, which conveniently surrounds the Center.

We got extremely lucky during our visit when a female walked slowly out of the trees carrying her recently-born baby on her back. As Mom ate, the curious baby climbed down and, after a few glances up at his mother to make sure all was OK, he started playing around like a little kid on his first visit to the playground. It made the long trek to get to Semenggoh well worth the effort.

Getting to Borneo from the U.S., while challenging, isn’t as difficult as it once was, thanks to frequent flights from Kuala Lumpur, Singapore, and other major cities around southeast Asia. And if you’re looking for a close encounter with one of nature’s most interesting, if not human-like creatures, there’s no other place like it.