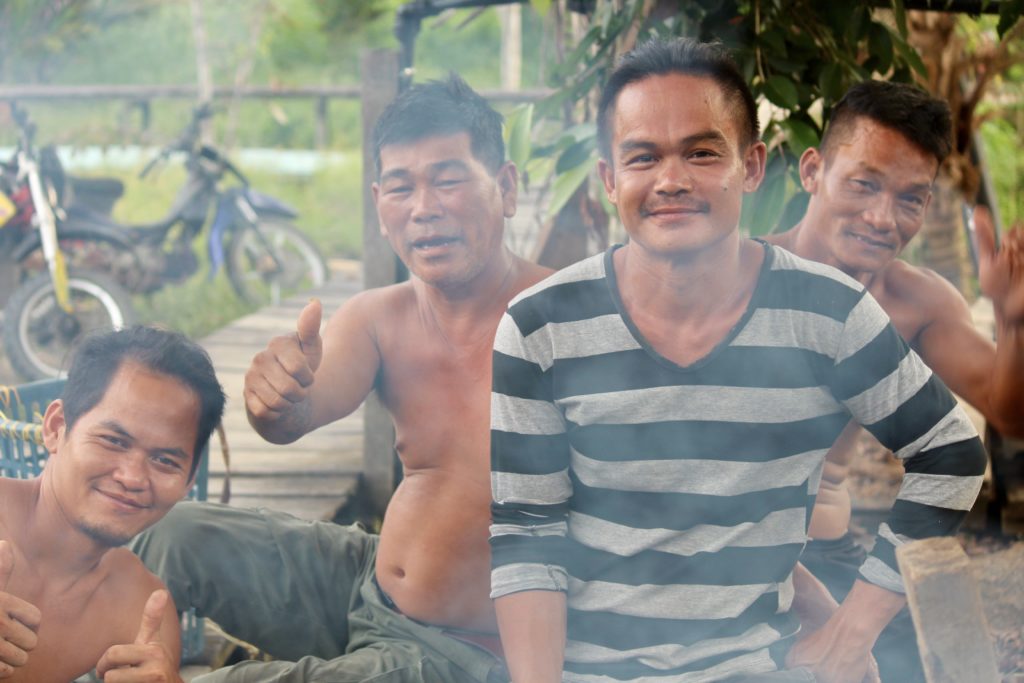 I’m piled into the back of a 4×4 on my first trip to Sarawak, alongside my compadre and boss Jettie.

We are barrelling down the road from Miri to Sungai Keluan: a strip of highway that can be described as part paradise, part post-apocalyptic, on our way to visit an indigenous community fighting to save their last remaining patch of rainforest.

Miri is the jumping off point for this region of Malaysian Borneo, and the centre of Sarawak’s offshore drilling wealth and oil pride (although tragically, we skipped the Petroleum Museum). The village we’re visiting is up several hours of corrugated logging road, and is Berkeley California’s teeny antipodean sister city.

Speeding Toyota Hiluxes almost exclusively occupy the highway, and alongside the road, we pass the entrance to Lambir National Park. Our beer guzzling local friend (in the driver’s seat) tells us that the National Park is so small and isolated that the mammal and bird populations have collapsed, the only positive outcome of which is a mass extinction of leeches.

After the park, we hit infinite fields of oil palm plantations, which range from lush fake forests to bald scruffy dust patches. All are in meticulous rows, occasionally separated by grizzly wooden shacks where foreign (mostly Indonesian) seasonal workers live, in what I can only assume are suboptimal conditions. Especially considering it’s 89 degrees with 80% humidity.

Jettie explains that because the plantations have created a monoculture, snakes and rats are flourishing in prolific numbers. But if you thought you couldn’t imagine anything worse than a rat and snake plague, think again: giant ancient lizards are also thriving on these plantations in a real-life Jurassic Park. I make a deal with myself not to wander off, so as to avoid sleeping with the leeches. 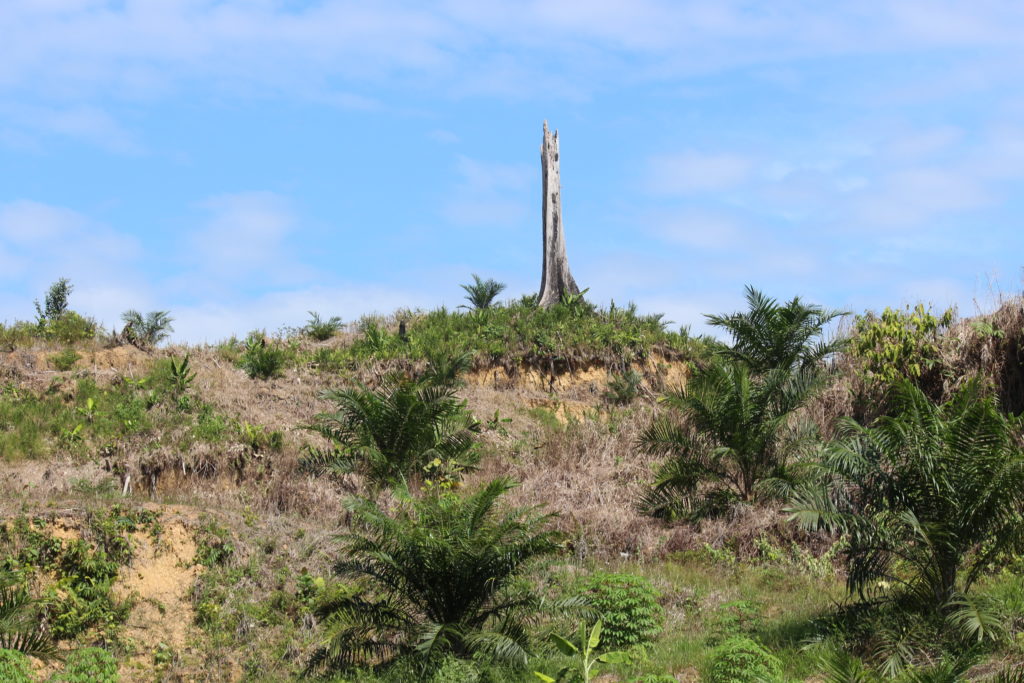 We arrive in Sungai Keluan just as the sun is setting, and pull our creaking bones out of the Hilux. Like most villages in Sarawak, Sungai Keluan is a longhouse – a utopian communal living scenario that would be the envy of even the hippest Williamsburg loft resident. At Sungai Keluan, 25 families live in the longhouse, and the verandah is so long I can’t see the end of it (although to be fair, I forgot to pack my glasses).

Since it is oppressively hot almost all of the time, the verandah is where all the action is, with toddlers stumbling, women weaving huge mats, teenagers chain smoking (to keep the mosquitos away, of course) and groups of ladies washing dishes and chuckling.

If you’ve heard about the nomadic forest dwellers of Borneo, this is not them. Everyone is tapping away on their cellphones, and a group of kids are watching Titanic on DVD. I’ve already had 3 friend requests on Facebook from the chain-smoking teens.

As the sky goes dark, the smell of firewood fills the air, and the frogs start their raucous symphony. The BBQ bursts into action, and the burak (rice wine) starts flowing. We eat fermented fish, river snails and wild boar, with an array of delicious local green things.

I chat with Jok Jau Evong, a local luminary of the anti-logging movement. To add to his caricature of renegade hero, Jok carries himself with a limp. Jettie tells me he hasn’t aged in 20 years.

In the 80s and 90s, dozens of communities across Sarawak set up road blockades to stall the deforestation armageddon that was going on around them. Shifty logging licenses were handed out like candy, and 80% of the virgin rainforest was gobbled up in the biggest biodiversity banquet the world had ever seen.

It was during this time that a logging company bulldozed Jok’s ancestral fruit trees. Pro tip: if you want to really cheese someone off, destroying their prized family heirlooms is a great place to start. Jok joined the blockades, rallying others from his indigenous networks, and has been fighting to save the rainforest ever since.

After several glasses of burak and several stories of the glory days, I flop onto my sleeping mat, too tired to unfurl my fiddly mosquito net.

8 hours and 8,000 bug bites later, I awake remarkably un-seedy, and wonder if this rice wine is actually Jok’s secret anti-ageing elixir. Jettie and I roll up our beds and fold ourselves back into the Hilux, off to explore the slice of rainforest this community rescued from the saws of the timber companies.

Our guides machete-chop their way through the shady forest to a clearing, where they conjure up a three storey BBQ out of sticks and stones, and start roasting us a school of fat fish for lunch. The beer cans are kept cool in the creek, and a stereo pumps out Country Western tunes, powered by a solar battery. 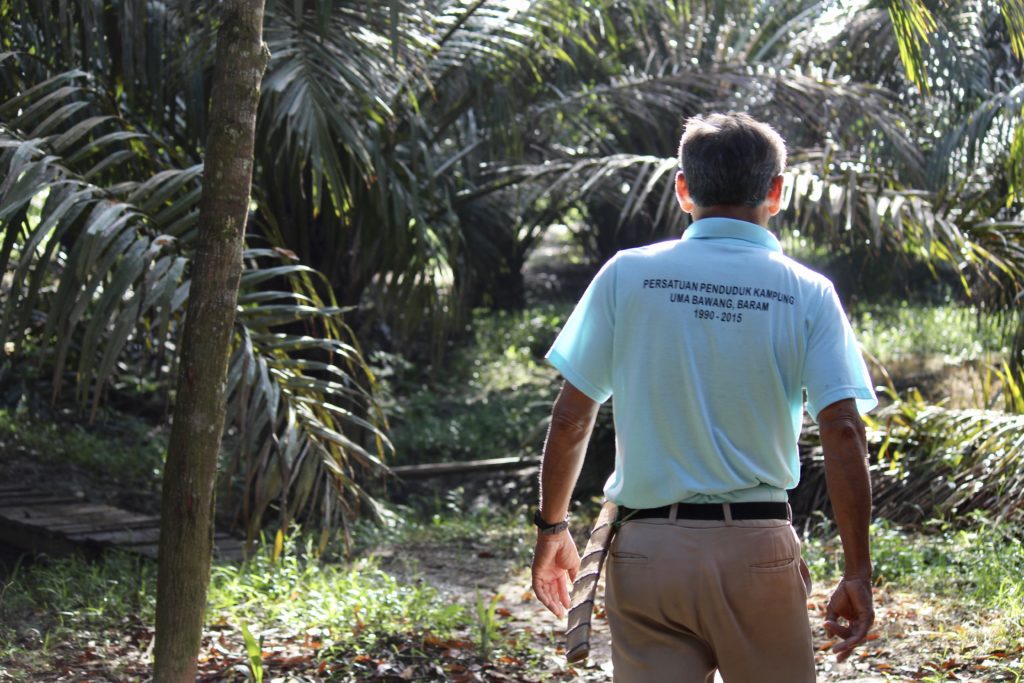 I chat with Avit, who is second in command after Jok, and rocks the classic uncle combo of trekking sandals and a floppy fisherman’s hat. He tells me they have big plans to build up the local eco-tourism scene, and bring people to camp in this last little patch of forest. I explain to Avit that most people think a trip to Borneo without orang-utans is like Paris without the Eiffel Tower – still very cool – but lacking as a profile-picture-worthy life event.

This place is idyllic as a weekend retreat from Petrol-Pride Miri, but I don’t see people flying across oceans and driving through Jurassic Park to get here. It is going to be an uphill battle for oil palm adjacent communities to pique the interest of picky travellers with all the large mammals and primates AWOL, and almost all of the rainforest long gone.

Once back at the longhouse, Jettie and I plod off down the hot stone pathway to the swimming hole, and leap into the cool water, shaded by swaying water plants. It is the perfect respite from the unrelenting sun, and from the excitement of the longhouse.

Just as we sink into the tranquillity of the moment, the power generator rumbles to life, spurting diesel fumes into our soggy faces. And this is really the perfect metaphor for the trip: what should be a pristine moment in nature is marred by something dirty, something industrial, or simply a sad truth.

There is a real opportunity for Malaysia to pull its environmental socks up and listen to the indigenous communities who have been living on this land forever. Continuing down the same path of destruction not only plunges us all head first into a very uncertain climate future, but it leaves this longhouse, along with many others, in economic purgatory. You can’t market yourself as an environmental wonderland while pumping diesel fumes into the face of your visitors. We’re going to notice.

The Borneo Project works with indigenous communities in Sarawak, defending rainforests, livelihoods and human rights. You can donate to our annual appeal by clicking here or sign up to our mailing list below. Your donation is the most direct way you can support indigenous rights and long-term forest protection in Borneo.